University Catholic (UCat) is the vibrant, highly-effective college campus ministry for the Diocese of Nashville. Since its inception in 2005, University Catholic has accompanied thousands of students on their path to holiness by Proposing Jesus Christ and Forming His Disciples.

Rooted in sacramental life, University Catholic has a visible presence at Vanderbilt University, Belmont University and other Nashville colleges. University Catholic offers a home away from home to accompany students in building a strong Catholic community of support and authentic friendships, learning more and growing in their Catholic faith, finding wholesome, joy-filled alternatives to the unseemly lures on college campuses, and using their God-given gifts to serve others.

Much of University Catholic’s success in bridging the gap between the Church and young people is by building up young leaders who maximize our efforts to evangelize their peers and ultimately lead the Church now and in the future.

Like Christ accompanied the apostles before sending them off to every corner of the world, University Catholic closely disciples a core group, who in turn are sent off to influence/disciple a small group until a big multiplication factor takes place throughout campus. Through one-on-one spiritual direction, discipleship mentoring, Bible studies, and more, UCat works with new student leaders each year who, like iron sharpening iron, invite their peers to join them at UCat events, dinners, Mass, Bible studies, and retreats.

Whereas a parish’s community is relatively stable, a college population is wildly transient. Every year, a quarter of the student population leaves and are “replaced” by wide-eyed freshmen, who just a few months ago were in high school. 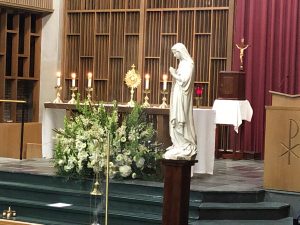 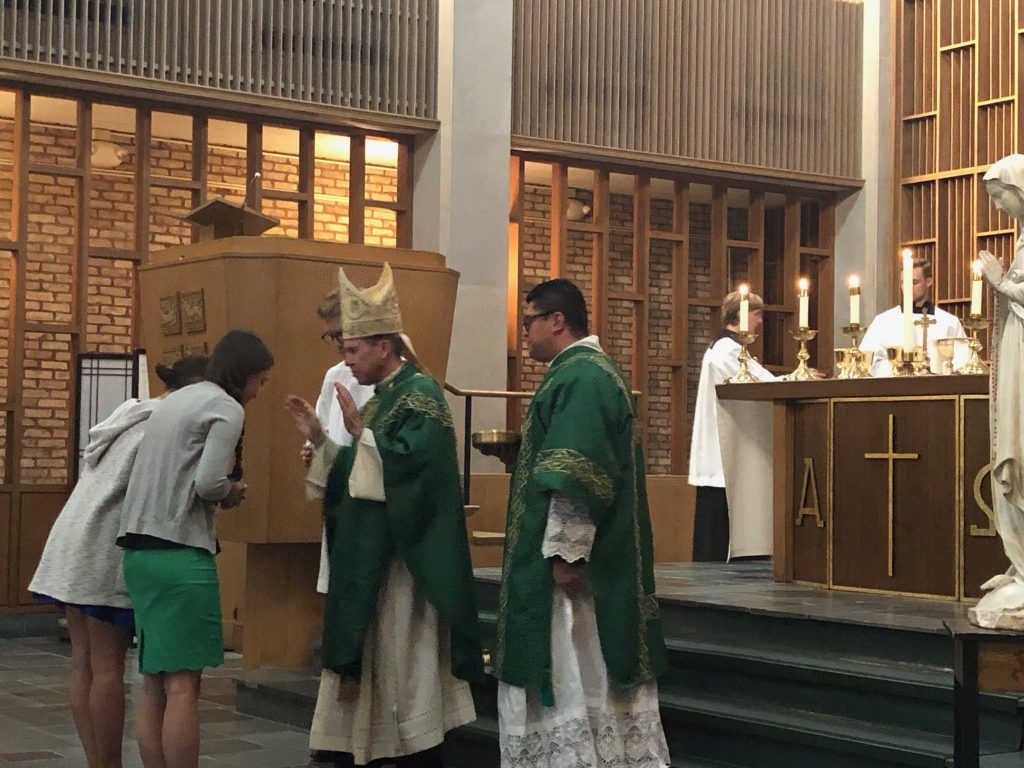 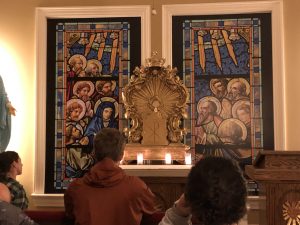 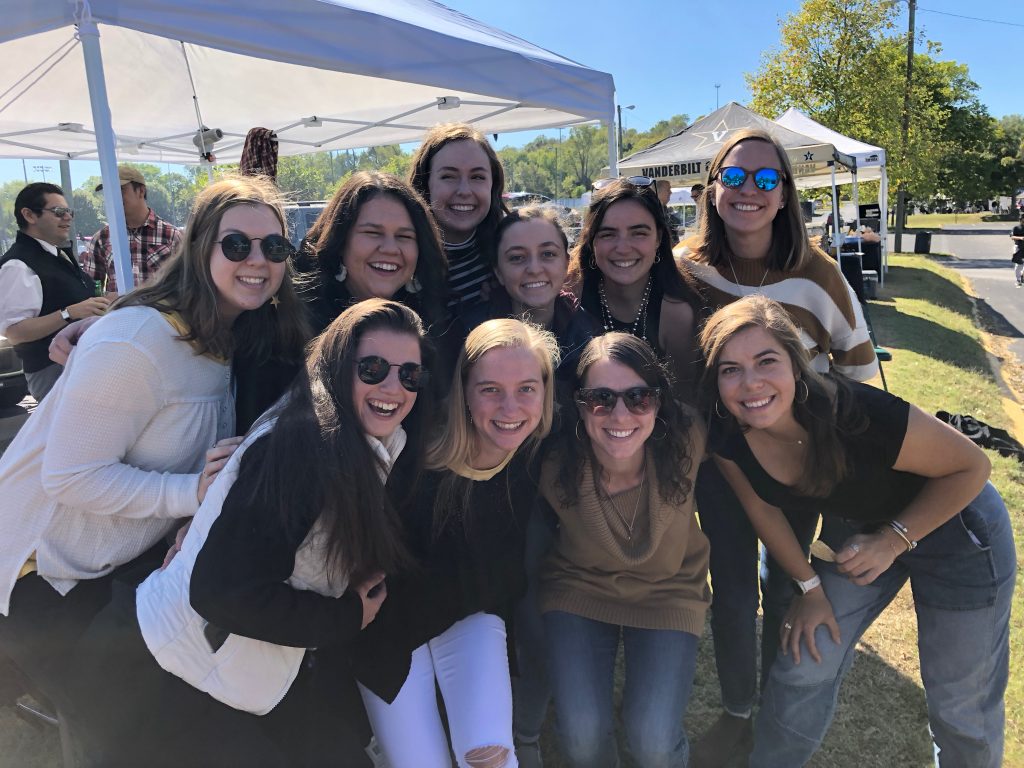 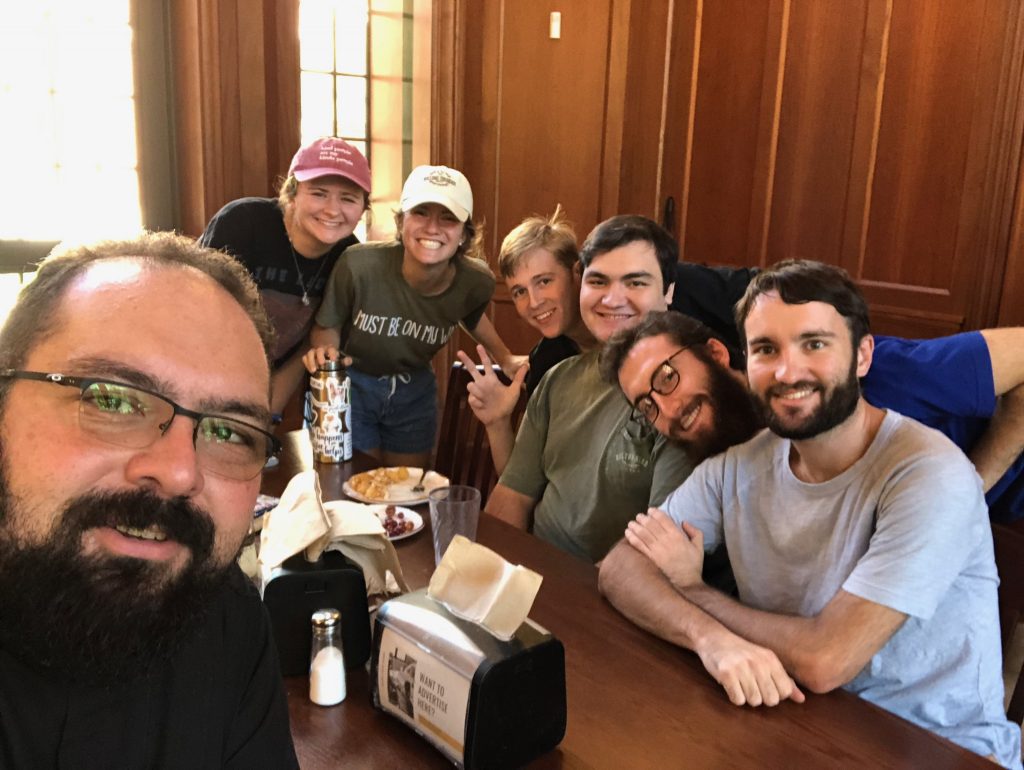 Every year, University Catholic works hard to attract and form the faithful freshmen who will be the student-leaders in the coming years. Also, seniors are always transitioning out of leadership roles so that sophomores and juniors may take their place. All this means that the effective student leadership “window” is about two years (sophomores and juniors). This makes University Catholic’s ministry heavily reliant on relationships and intensive shepherding every year. There is never time to rest on the laurels of past success.

Despite being a diocesan ministry, University Catholic serves students that come to Nashville from all across the United States and other nations. University Catholic also takes advantage of outstanding, national-level Catholic conferences, leading groups to events sponsored by FOCUS and the Knights of Columbus. 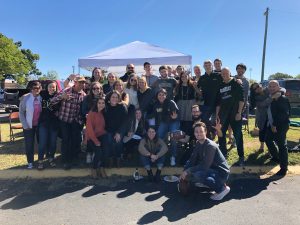 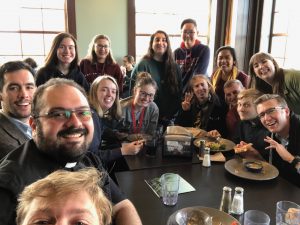 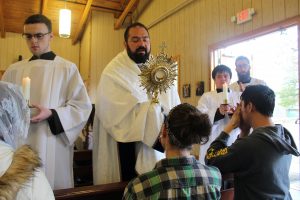 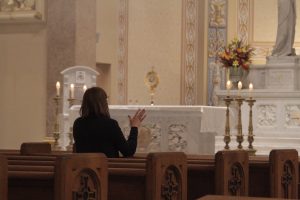 Two graduates of UCat have been ordained to the priesthood (2017 and 2019); six other graduates are currently in seminary; another four of our students hope to enter seminary this fall. University Catholic’s Melchizedek Project currently works with over a dozen college men who are exploring God’s call to their life through the priesthood. In addition, several of UCat’s female students are actively considering the religious life through our AVOW program. Hundreds of UCat graduates serve the Church through missionary, teaching and volunteer work; thousands have been awakened to the beauty of the Catholic faith and are actively practicing their faith; dozens have married and remain committed to building strong Catholic families. 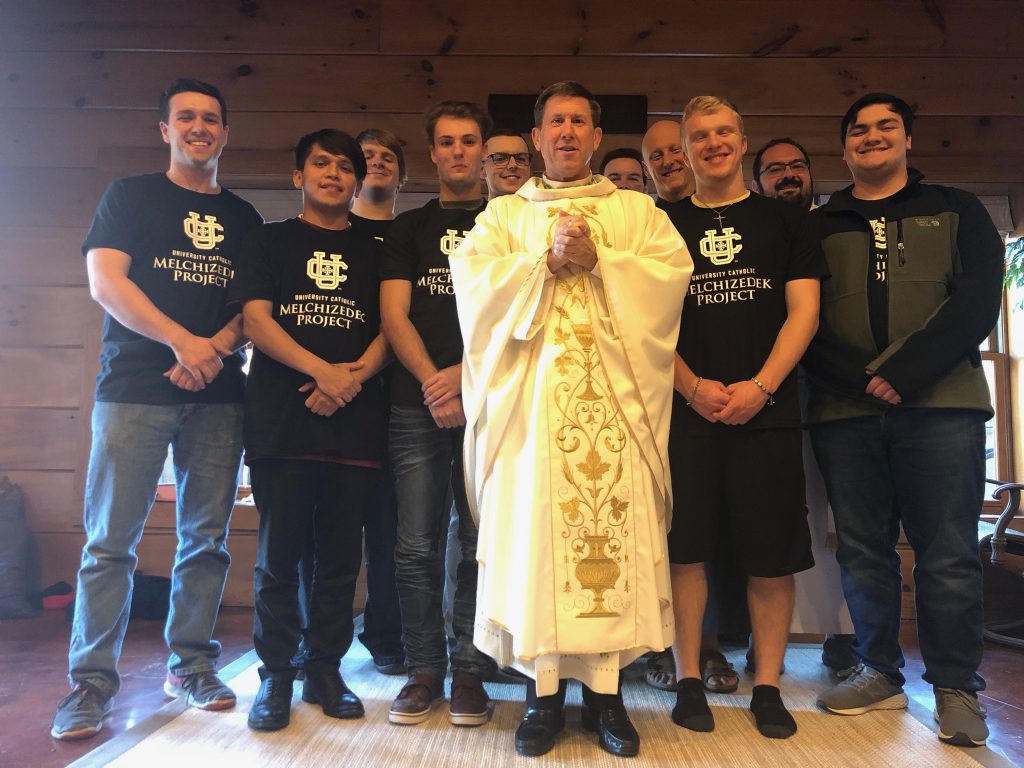 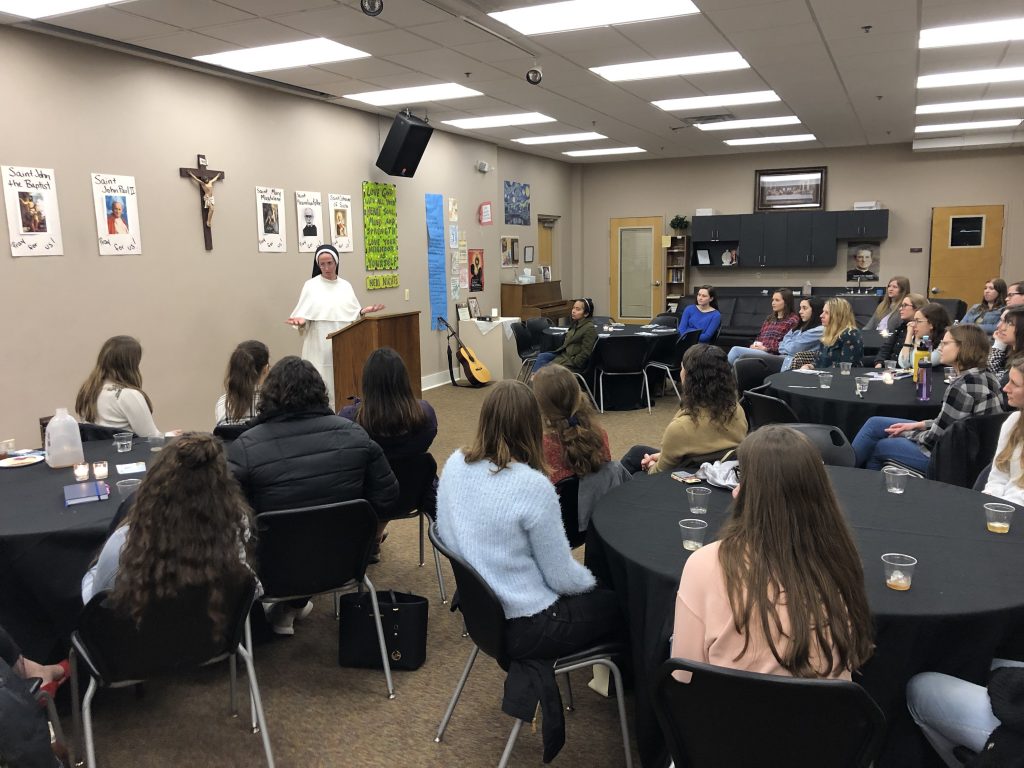 National statistics are grim about the vast number of college students who abandon the faith during their college years. University Catholic gives witness on their secular college campuses that the Catholic faith is alive and thriving. UCat’s daily Masses typically have over 50 students in attendance; Sunday Mass is full of young people who actively participate in music ministry and as altar servers and extraordinary ministers of holy communion. Eucharistic adoration is “manned” by students from 10 am to 10 pm every Wednesday of the school year and for an hour before daily and Sunday Masses. Each semester, UCat offers a weekend retreat, Awakening, which is exclusively for college students and led by college students. Over 100 students take part each semester and begin a closer walk with Christ, many of whom return to confession for the first time since grade school.

Another example of University Catholic’s success in accompaniment is their annual March for Life Pilgrimage to Washington, D.C. The group leaves Nashville at midnight for a 14-hour bus trip, where the formation and evangelization begins. The group prays the Liturgy of the Hours throughout the 3-day pilgrimage, views and discusses pro-life movies during the bus trip, spends hours waiting in the Basilica of the National Shrine of the Immaculate Conception for the Vigil Mass for Life, tours the Saint John Paul II Shrine, attends the March for Life and Rally for Life, and the pilgrimage concludes with the Cardinal O’Connor Conference for Life before returning home. This pilgrimage of prayer, worship, activism, and study — interspersed with the fun that is inherent in youth ministry — has changed hearts and minds and made life-long impressions regarding the vastness of the universal Church and its unwavering commitment to the Gospel of Life. 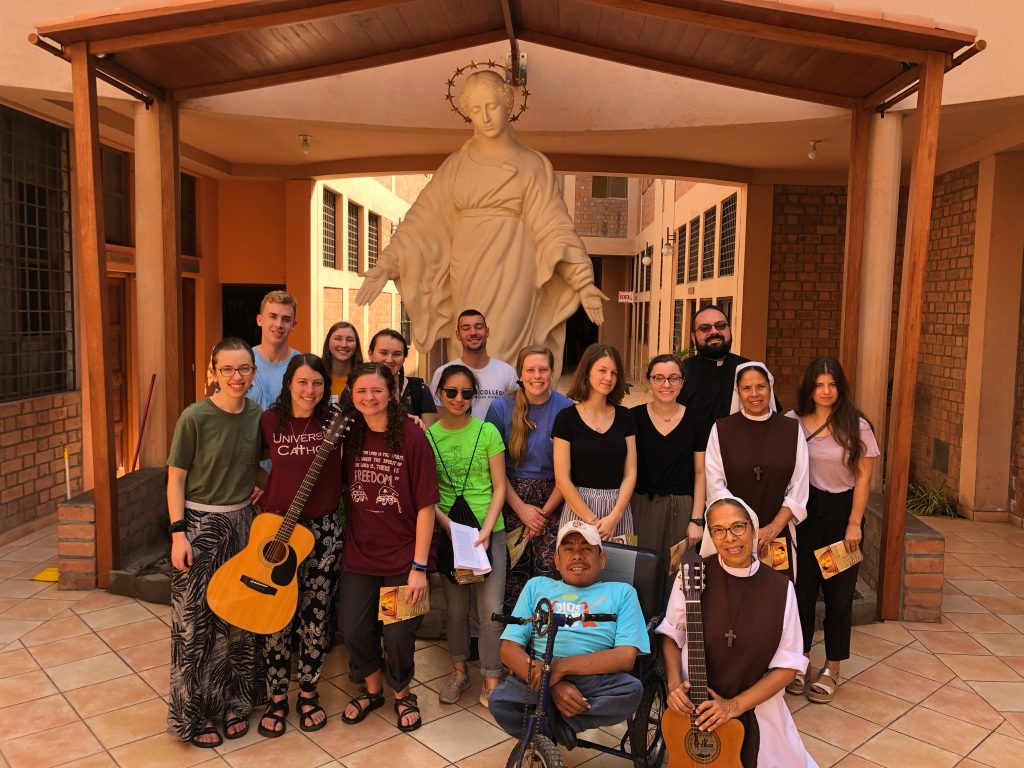 Spring break mission trips led by University Catholic expose students to the needs of our brothers and sisters across the globe. In March, UCat led 22 students to Callao, Peru to live, pray and work alongside the Community of Beatitudes. The students worked hard, prayed hard and got to witness this faithful religious community up close and personal. They liked seeing their hard work meet the needs of others, and they were happy to experience the universal Church in a new, but familiar way.

Service is an important part of University Catholic’s mission, and it appeals to the youthful energy of college students. University Catholic offers many opportunities throughout the year for students to serve the poor and marginalized through Room in the Inn, mission trips, and Dismas House. This past year several UCat students organized a new project of collecting items, preparing blessing bags, and distributing them to people on the streets who were experiencing homelessness. All of these service opportunities prove to student participants the great contributions they can make to the lives of others and the community.

A ministry of the Roman Catholic Diocese of Nashville.

Sunday 9 pm
(Cathedral of the Incarnation)

Last day of our pilgrimage in Jerusalem: Via Dolor

Our pilgrimage continues today we visited Mount of

Gloria at Shepherds Field and The Magnificat at Ch

We continue our pilgrimage to the Holy Land. Today

We are on our way to our Holy Land Pilgrimage. Ple

Join Human Dimension for the St. Nick’s Party to

“The Church and the world have a great need for

starting this thursday! CREDO (Latin for ‘I be

Welcome Week is upon us!! Check out below for date

We are ready to welcome our @vanderbiltu students.